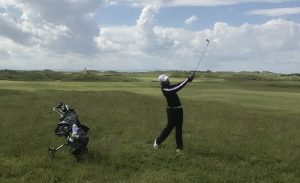 28 June 2017 – Western Gailes. Royal Troon. St Andrews. A far cry from the dusty patch in Rosemoor where Frankie Manchest used to kick around a scruffy soccer ball with his friends.

A chance encounter and a bit of ingenuity on his part 14 years ago completely changed the course of Manchest’s life and the significance was not lost on the 19-year-old George golfer during his recent trip to the United Kingdom.

“Standing on the first tee at Western Gailes, I thanked God for Oom Joseph Booysen, because I shudder to think how my life would have turned out if our paths never crossed,” says the GolfRSA National Squad member.

“Oom Joseph gave me a mulligan, because he gave me golf. The South African Golf Development Board (SAGDB) gave me the tools. Now GolfRSA has given me some real goals. This trip to the UK has motivated me to work even harder. I want to compete on the world stage and I want to win.”

Manchest was just five when he first met Booysen, one of the first coaches of the SAGDB.

“There was this patch around the corner from my house where we used to play soccer,” explains Manchest. “One day I saw this man. He had a stick and a bucket. He would take out a little white ball and hit it with the stick, over and over and over. After a while I walked over and I asked him what he was doing. He told me he was working on his golf swing.

“I had no idea what he was talking about, but I saw a way to make some money. I asked him if I could collect the balls when he was finished. He told me to ask my parents first. I ran around the corner and waited two minutes, came back and told him they said yes.

“Every day he explained a bit more. I watched, picked up his balls and collected my R5. One day I asked him if I could try. For a few weeks, he let me hit a couple of golf balls. Then one day he said if I wanted to learn to play properly, I should ask my parents if I could join the SAGDB programme.

“So I ran around the corner again, waited two minutes and told him they agreed. And that’s where my journey with the game of golf began.”

“Frankie was a natural talent,” says Booysen. “He struck the ball beautifully as a five year old and nothing has changed in 16 years. Like any teenager, he went through rough patches, but golf steered his life and I couldn’t be prouder of what Frankie has achieved.”

Manchest enjoyed the SAGDB’s support even after he graduated from Rundle College. His dedication to the game paid off when he was selected to the victorious Presidents Team that reigned supreme in the B-Flight of the 2016 Africa Zone VI Golf Tournament.

It earned him a spot in the GolfRSA National Squad and, as the leading SAGDB player in the Curro SA Juniors International in March, Manchest qualified for the RB German Junior where he finished sixth overall and second in the Under-19 category.

“Having played last year, I was able to execute a much better game plan and scored really well,” he says. “But that’s the thing about this game. They always tell you that you get better with experience, but you never believe it until you see the results yourself.”

Back home after competing in the Carrick Neill Scottish Open Stroke Play Championship and the St Andrews Links Trophy, Manchest is excited about his future.

“The SAGDB gave me the tools to make a career of golf, and for that I will always be thankful,” he says. “I learned the basics well from Oom Joseph and once I was ready, I was given the opportunity to compete against the best players in South Africa to gain experience.

“Every year I was given more exposure that helped me to improve in steps. I’ll never forget the first time I was chosen to represent the SAGDB in the Triangular against Scotland and the SA Juniors. I was overwhelmed with the fear of disappointing my coaches, but each year the experience got better and I performed better. Now I’ve just returned from the UK, having competed against the best amateur golfers in the world. It’s something I never would have experienced without their support.

“I was really proud to finish in the top 40 in the Scottish Open, but missing the cut in the St Andrews Links Trophy was disappointing. I learned so much on this trip. We spent time with Gavin (Groves), who taught us exercises that benefit us as golfers. Neil (Homann) took us to play Royal Troon and I got to play at St Andrews again.

“I first saw St Andrews three years ago went I went to Scotland with Grant (Hepburn). Hamish Grey from the Scottish Golf Union invited two SAGDB players and thanks to Mr Johann Rupert, we played in the pro-am at the Scottish Open, watched the world’s top golfers at The Open and played the Old Course at St Andrews.

“It was an overwhelming experience for a laaitie from George to be playing a course I’d only ever seen on television. This time around, though, I could really appreciate the valleys, the bunkers, the wide fairways and greens that make St Andrews the best links course in the world.

“I am even more determined than ever to make golf a career. I want to start the PGA Teaching Professional course next year and I want to compete in top events. And once I’ve graduated, I want to turn pro. I hope to inspire all the kids in the SAGDB programme. The SAGDB taught me to work hard and to dream big, but we all need heroes to push us to the next level. I can’t thank Mr Rupert, Grant, the SAGDB and GolfRSA enough for opening the doors that keeps me pushing forward.”

Written and released by Lali Stander on behalf of GolfRSA, a SAGA and WGSA Not-For-Profit company.